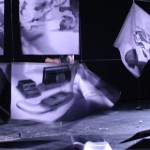 1. Introduction
„I wish that we were perceived as how we really are and not as Gadje present us. I wish we finally stood for our own identity. That we spoke for ourselves and that we pursued our own politics.“[1]

This is a quote from the show Roma Army that premiered at Maxim Gorki Theatre in September 2017. The project was based on the idea of two Romani actresses and Roma-activists, Sandra and Simonida Selimović, directed by one of the Gorki’s resident directors, Yael Ronen. The actors are Romnija, Roma and Romani travellers from Austria, Serbia, Germany, Kosovo, Romania, England and Sweden. On stage they develop the idea to form a self-empowering, feminist and queer Roma army to fight structural discrimination, racism and antiziganism, but also to emancipate oneself from an internalized victimization.

I want to analyse the implications of the wishes that the actress expresses in the trailer from a theoretical point of view, as well as in the context of my dramaturgical practice in a German state theatre. In doing so, I have to acknowledge my own entanglement: I am writing here as a student of Goethe University, but as I work as a dramaturge at Maxim Gorki Theatre in Berlin, I somehow represent a certain political and aesthetic approach, promoted by the artistic director Shermin Langhoff and her team. Self-evidently I cannot represent the diversity of opinions and accesses to theatre as practiced at Gorki, but of course I have been dealing with questions of representation, identity politics and such in my everyday practice there and can share some insights, experiences and thoughts with the reader. I will further elaborate how the concept of intersectionality can serve as a tool in a critical theatre practice and prevent us from an essentialist understanding of identity. Finally, I want to carve out which role a dramaturge could play in all of that.

In this combative confessional-like monologue, created in the process of devised theatre in a group of marginalized people (Roma in this case) some key aspects of the confrontation of identity and politics within theatre emerge. Firstly, the call for authenticity: to be seen how we really are is combined with the refusal to be attributed by white, non-Romani people (Gadje). Secondly, the issue of self-empowerment arises: to be proud of one’s own identity; in contrast to trying to cover differences up. Finally, the actress expresses the aim to speak for oneself and to make one’s own politics. Thereby, she addresses the complexity of the term of representation.

We can understand this second concept of re-presentation as staging or even making significance since one attributes certain characteristics to a subject in order to produce a meaningful statement. A representative mediates and translates the subaltern position, referring to the subaltern as a homogeneous group and re-presenting them as such. The first concept of representation as speaking for (as in politics) includes the inner dynamics of advocacy (Für-Sprecherposition). The advocate’s position is laid bare and requires the localization of those spoken for. The subaltern are being represented as a heterogeneous group, lacking their own acting power. Advocates draw attention to the fact that they can only contribute the subaltern’s concerns to the hegemonic discourse as a translation of such. Naturally, translations cause shifts in meaning. According to Spivak, a radical practice should consider both modes of representation. She further states, that critical intellectuals who occupy key positions or can get in touch with the privileged should reflect on and use their privileges to make the subaltern’s voice heard.

Spivak argues, that the subaltern can neither speak nor act, unless their heterogeneous positions are being represented in the discourse (by proxy). The second sense of representation harbours the danger of essentializing the subaltern by robbing them of their diversity of voices. This is due to the fact that the term re-presentation assumes that there is something essential that can be brought back to presence. In terms of a theatre practice that tries to take a postcolonial perspective, including findings of Gender or Critical Whiteness Studies, this usually leads us to call for the authenticity of an absent other. One can argue that reaching out for an authentic representative is necessary to provide visibility to a demographic group of people who are structurally excluded from the hegemonial discourse. But again, in doing so, we may disguise our own position in the neo-colonial system and promote an outdated idea of identity.

There is another trap in the second sense of re-presentation; that is, representation as portrait or depiction. It not only assumes that something essentially absent can be re-presented, but it also assumes that it is something visible and distinct. I noticed that institutions who are attentive to these issues were increasingly criticized for over-engaging in particular marginal interestsmarginal particular interests. This has not only been the case in the theatre or the cultural industry, but also in a wider political and public sphere. Above all one finds the accusation of having lost sight for the main type of oppression, namely class. For reasons of space, I have to abstain here from examining the playing-off a main contradiction against a side contradiction. But what is at stake here is that there are types of oppression which cause structural exclusion that are less visible than others, for example class. Also, we tend to overlook the complexity of these types and their intertwinings.
The paradigm of intersectionality, coined by the American civil rights advocate Kimberlé Williams Crenshaw, can help us to rethink the representation of identity and its deconstruction in theatre. The theory emerged from the Black feminist movement and considers the entanglement of oppressions due to the coordinates race, class, gender in one person. In order to overcome social injustices, the individual has to think of each element as inextricably linked with all other elements. This forces us to a more complex understanding of entities of a presumed identity as Black or worker et cetera. What identity is and who determines it, should be negotiated again and again and stay disputable.
Coming back to the trailer we saw in the beginning, I would say that it does not matter if the actress describes what is actually true or authentic for a Roma experience. It is also not about preferring the narrative of history as imperialism as the correct version of history. What should arouse interest from a theoretical point of view here, is to retrace how one narrative (Roma as victims, as persecuted) of reality was established as normative. Later, the audience will experience tensions within the group, since all individuals suffered in different ways from the label Roma, due to their skin colour, their economic status, etc. Intersectionality argues in support of a less accumulative idea of oppression and hegemony. It points to the horizontal junctions and particularities and can therefore grasp the mechanisms and structures of power that promote a specific and inadequate concept of identity more accurately. As an intellectual, a curator, a dramaturge one should keep the double meaning of representation in mind and dare to confront oneself with these delicate issues. I believe that those who can speak (in terms of Spivak) have the responsibility to include those into the discourse who do not have access to it for several structural reasons. I tried to point out the associated consequences and difficulties regarding the double sense of representation. Nevertheless, one should see the intention to incorporate the theory of intersectionality in one’s artistic creation as a continuous practice and reserve the possibility to make mistakes, to self-reflect and communicate with other theorists, practitioners and experts.

As I have established out, it is difficult to enable participation to marginalized identities without blundering into the trap of essentializing someone’s identity. To refer to artistic practice, this means that claiming that a role written as a Black character (such as Othello) can only be played by a Black actor only supports the idea that there is something essentially different in the Black body acting on stage. Doesn’t this only reverse the disastrous passed-on technique of Black-facing and excluding Black individuals or PoCs from classical plays? As we can see, the concept of authenticity is tricky.

So what can we do?

Following the argumentation of Spivak and Nandi[3], I would also distance myself from a deconstructionist, anti-essentialist approach. Instead I am convinced by the application of a strategic essentialism as a postcolonial strategy of resistance. I have to confess that the sentences I quoted in the beginning evoked some reluctance in me, since they completely reproduce essentialized concepts of identity in a bold and simple way. Nevertheless the marking of the speaker’s or actor’s position in this case are crucial. Also, we should not neglect the power gaps that underlay our society and the political dimension of a Roma ensemble which is given space on a German repertoire theatre for the first time. Perhaps, one has to first accept these gaps in perception, aesthetics etc. as they are caused by diverse accesses to cultural and economic capital (Bourdieu)[4] and give a platform to those outside the discourse, while never stopping to deal with one’s own position in all of that. I believe that the dramaturge can serve as a critical intellectual as described beforehand, facilitating and including the subaltern to the hegemonial discourse. The dramaturge is part of the artistic team, but can also extract from it. The dramaturge functions as a translator, a critic, producer and consultant and should pursue the strategy of strategic essentialism, so that a second step can follow.